Nottinghamshire Hospice supporter and patient Sam Perkins has starred in a children’s book aimed at helping young children understand disability. The book, featuring Sam, who has Motor Neurone Disease, and his young niece, is being sold to raise funds for the hospice and MND research.

Lily and Sam tells the story of four-year-old Lily and her favourite uncle Sam, who uses a wheelchair and needs a ventilator to breathe. They head to a local park, but the swing is tangled, the slide covered in grime and the roundabout broken. Using their problem solving skills and with the help of some special friends – a cat a dog and a hedgehog – they set about making things right.

The book, written and illustrated by Sam’s sister Victoria and brother in law, Andy, has already sold 140 copies including one to former Nottingham Forest Captain Chris Cohen who read it aloud online as part of the club’s bedtime stories series.

Sam, 38, a triathlete diagnosed with MND last year, said: “The book gives out a strong message to children that disability is nothing to be afraid of and that you can still contribute when you have a disability. It’s also about not giving up and working with others to solve problems.

“We’ve had great feedback, with parents telling us that their kids won’t go to sleep till they’ve read it to them.” 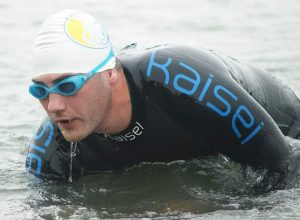 Sam and his wife Emma set up their own Charity, Stand Against MND (SAM), which has already raised more than £16,000 for Nottinghamshire Hospice and the MND Association. Some of his fundraising plans – such as taking part in a triathlon in June – have had to be put on hold due to the Coronavirus pandemic.

He said: “The book’s given us a focus as it’s something that can still happen during lockdown while our other plans are on hold.”

Co-author and illustrator Andy Stonehouse said: “Sam has been in a wheelchair for five months but to Lily he’s just fun Uncle Sam.

“One of the reasons for writing the book is to explain to a young child that it’s normal to have disabilities. You may have to do things in a different way but by working together you can find a way through.

“Sam’s diagnosis was devastating for the whole family but the way he’s handled it is truly inspirational. His determination and can-do attitude are gold dust.” 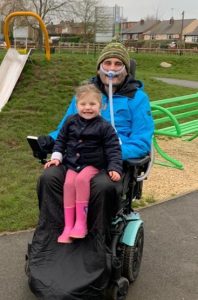 Andy has done readings of the book at his local library in Quorn, at local toddlers groups as well as online. It is the fourth in a series of children’s books featuring Lily’s experiences. He’s currently writing one about Lily celebrating her birthday in lockdown.

Gemma Taylor-Mahon, Fundraising Manager at Nottinghamshire Hospice, said: “As a mother of small children, one with a disability, this story could not be more empowering.  Not only for children who have a disability themselves but for teaching them all that people do have a huge amount to give, it might just be in different ways.

“We are very proud to be associated with the book and are hugely honoured by the support we have received from Sam and his family – what an absolutely incredible achievement!”

Before the Coronavirus pandemic hit, Sam regularly attended Day Therapy at Nottinghamshire Hospice where he received counselling and massage therapy. He is still benefitting from counselling sessions over the phone.

Sam said: “When you’re in your 30s you don’t expect to have to think about hospice care. I knew the hospice was here but had no idea what the care involves. To experience what it does is life changing.

“The support we’ve received from staff and volunteers at Nottinghamshire Hospice has been phenomenal. Without it we wouldn’t be able to continue enjoying life as much as we do.” 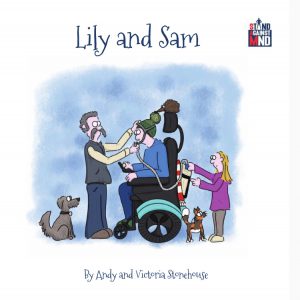 Lily and Sam is available in paperback for £8.99 on Amazon.

Nottinghamshire Hospice is expecting a loss in funds of £150,000 due to shop closures and event cancellations. It launched its Forget Us Not appeal last month to address the shortfall. Find out how you can support the appeal here.