This week we’ve been sharing stories about how some of our supporters have chosen to remember their loved ones. Since musician Gordon Pollitt died in 2018 from oesophageal cancer, friends, family and former band-mates have remembered him through his music.

Gordon was singer, guitarist and founder member of Nottingham Folk/Blues/Punk band Wholesome Fish, and in February the band put on a farewell gig in his honour on what would have been his 54th birthday. It was an opportunity for Gordon’s family, his friends and supporters to remember him and to celebrate 30+ years of the band’s music.

The gig, which packed out Nottingham’s Malt Cross, attracted an audience from far and wide and raised £1.5K for charity.

Millie, Gordons eldest daughter – pictured below with her dad –  said: “Dad’s whole life was music and therefore it was a huge part of my upbringing. There is no Dad without music. It has played a big part in ceremonies since he passed away. The gig in February was a very significant event. It was a connecting experience, very powerful, but quite overwhelming for me being surrounded by people I knew through Dad.” 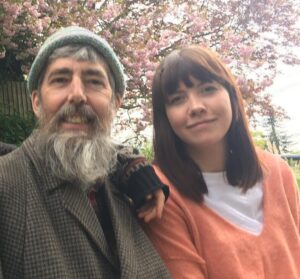 Fellow band-member Steve, who played double-bass at the start and later returned to the band, said: “What was good about the gig was lots of people came – including people I’d not seen for 30 years. It was a celebration not just of Gordon but of the whole scene as it was decided this would be the last time the band would play.”

Gordon received care at home from Nottinghamshire Hospice at the end of his life and Millie received emotional support and complimentary therapies at the hospice to support with the upheaval and complexity of caring for someone at the end of life.

“Music was hugely important, especially at the end of his life. We had people from his various bands over on Monday nights right up until the week he died. He’d reserve his energy for their visits. Just a few months before he died he said ‘singing, making music and dancing – that’s how we talk to god’ demonstrating his affinity to the power of music.

“It was a very challenging time for me. Being with someone so close to me at the end of their life was completely new to me. The hospice support meant I had a place to consider my own needs, to offload and as a sounding board to figure out next steps. That was totally invaluable.” 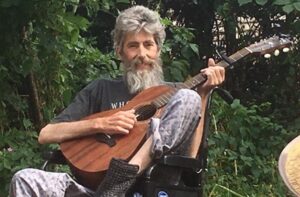 Now Gordon’s friends and family can remember him through a back-catalogue of his work stored online on the British Music Archive and on YouTube. Millie and Steve have both revisited this recently, and say the music has helped them process their grief at different stages.

“Having the material gives you comfort immediately after someone has died, but you reach a point where you can’t bear it, then bit by bit you revisit it and although it’s still sad you can see your own reaction change as you go through the process,” said Steve.

“It’s like a barometer by which you measure your grief,” Millie added.

Nottinghamshire Hospice can help you celebrate the memory of someone special in many different ways.  From dedicating a leaf on our Tree of Life to taking on a challenge in their memory, there are lots of opportunities to get involved. Find out more here.