Nottinghamshire Hospice patient Ray Mellors was greeted like a hero on a trip to the Normandy beaches where he took part in the D-Day landings 74 years ago.

Ray, 93, who has not been back to France since he fought in the allied invasion of Western Europe, took part in a week long remembrance tour organised by the travel arm of the Royal British Legion, during which he placed a wreath at the spot where he lost a close comrade.

His trip took in the five Normandy beaches of Sword, Juno, Gold, Utah and Omaha, Bayeux Cathedral and War Cemetery as well as Grimbosq Bridge, where he was invited to place the wreath. 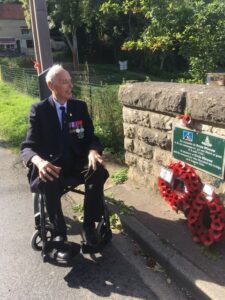 Ray, with others from the South Staffordshire Regiment, landed on Sword beach in 1944 shortly after D-Day and was heavily involved in the liberation of Caen before moving further into France and on to Belgium. He later joined Blackwatch regiment and took part in the Rhine crossing.

Ray said: “Looking at the beaches when the tide was out you realise how much beach we had to cross before we got onto the sand banks. It’s no wonder so many people were killed. I had tears in my eyes, especially when I placed the wreath. It really tugged at the heart strings.”

French villagers came out to meet the veterans and many wanted to thank Ray personally for his part in the liberation of France. 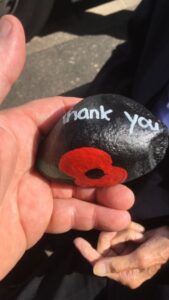 “People of all ages came up to me, grabbed me by the hand and said ‘Thank you!’ including one young woman whose mother was an Auschwitz survivor,” he said.

“Even though I said when I got home after the war I’m never going to cross that channel ever again, I wouldn’t have missed it for the world.”

Ray’s daughters Sharon and Carol responded to a call for surviving World War II veterans to join tours provided free by the Royal British Legion after staff at Nottinghamshire Hospice spotted the opportunity.

Carol said: “Dad has had a brilliant time and he’s been on a high ever since. We thought he might be tired but he is still buzzing from the trip.”

She praised Ray’s carer, Jim Kenyon, a former paratrooper sourced by the Royal British Legion to accompany Ray on the tour.

“Dad hadn’t met Jim before he set off, but he was perfect and he kept in touch with us, sending us photos so we could follow Dad’s progress.”

Jim has promised to keep in touch and has offered to come to the hospice to talk to patients.

Jim said: “It was an absolute pleasure to accompany Ray and share his experiences. To listen to Ray and the other veterans is something money can’t buy.”

Journeys of Remembrance are available for all ex-servicemen and women who fought in WWII to return to where they served free-of-charge. To discover more, visit www.arenatravel.com/our-holidays/remembrance-travel.

Nichola Rowlands-Smith, Head of Travel at the Royal British Legion, said: “It is very emotional and cathartic for veterans to do these tours. Often the things they remember are not macabre but funny stories – we encourage that kind of remembering.

“By the end of the trip there is such camaraderie among the veterans, they are all sharing stories. It can be very different to their life in the UK where they may be isolated. They are treated like celebrities by the French people who come out to meet them and ask for their autographs!”

Liz Morgan, Clinical Nurse Specialist at Nottinghamshire Hospice, said; “It’s important for patients to take opportunities like this while they can. Ray really benefitted from his trip and was overwhelmed by the welcome he received, he hadn’t realised people were so grateful.  We are enjoying looking at his photos and hearing all about it.”