Hilary comes to the hospice for massage treatment and reflexology to help her relax as an antidote to cancer treatment. She is now taking on sections of a long distance walk to rise funds for the hospice.

Hilary was diagnosed with Ovarian Cancer in 2019. She was treated with two radical surgeries, and several bouts of chemo. Her treatment was disrupted by the Covid-19 pandemic.

A scan last December revealed the cancer was still there and she was referred to the Community Palliative Care team who told her about Nottinghamshire Hospice.

“I said I’d really like a massage, and the Palliative Care Nurse suggested Hayward House, but she also mentioned the hospice,” said Hilary.

“I’ve had friends who’ve been looked after by Hayward House but as I go to the city hospital for all my appointments, it’s nice to come somewhere off the hospital campus, without those associations.

“The massage is really helpful. When you’re having drugs and needles put into you all the time it’s so good to have something nice done to your body and to experience something nourishing, rather than the chemicals that are part of chemotherapy.

“I find the massage nurturing, healing and replenishing.

“It helps with ordinary things like having a stiff neck through carrying tension. Rather than dealing with the cancer symptoms themselves, it’s about dealing with all the stuff my body is dealing with.”

Hilary also tried reflexology at the hospice, which she described as a ‘revelation,’ and has recently started having counselling over the phone for emotional wellbeing.

“All these services are provided free of charge and the hospice even provides me with a driver so I don’t have to rely on friends or taxis, as I find driving uncomfortable these days,” she added.

“And when I get too sick to carry on, the plan is for me to receive care from the Hospice at Home team.” 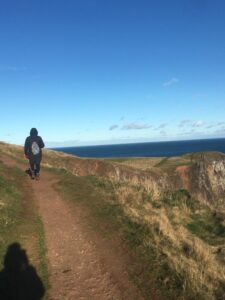 Hilary was keen to complete a long-distance walk or pilgrimage to raise funds and awareness for the hospice. She set her sights on the 97-mile St Oswald’s Way in Northumbria before realising this would be too much for her.

Instead she is doing parts of the walk, with friends joining her for different sections. The walk follows an ancient pilgrimage route named after St Oswald, early 7th century King of Northumbria. It takes in stunning stretches of the Northumberland coastline, a section of Hadrian’s Wall, river valleys, castles, hills, villages, forest and farmland.

Hilary, pictured below on a visit to Stonehenge,  is following the route in reverse, finishing off at Lindisfarne. 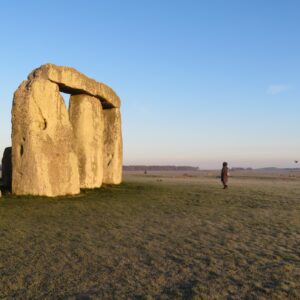 When she comes home from Northumbria, she’s invited friends to join her on a ‘Wollaton Park Wander’ to round off her fundraising appeal.

Hilary has lost her husband, sister, mum and brother to illness in recent years which has focused her mind on end-of-life issues.

Her husband Joe died from primary liver cancer in 2014. Hilary stayed with him at hospital for the last two weeks of his life. The couple got married on Gervis Pearson ward at Nottingham City Hospital when his six-month prognosis turned into six weeks.

Encouraging conversations about life and death

As well as raising money, Hilary wants to raise awareness of life and death and plans to blog about her experiences in a blog called ‘St Oswald’s Way: Walks and Wonderings.‘

“I want to use the walk as a springboard for discussing bigger issues,” Hilary said. “It’s about communing with the ancestors. Visiting ancient, neolithic sites makes you think about what will happen to your body when you die.”

Hilary sets off on her walk on 27th June and aims to raise £600. To support her fundraising appeal go to: www.justgiving.com/fundraising/hilarysouth

If you’d like to take on a challenge for Nottinghamshire Hospice, fundraise or support us in other ways, there’s lots of ways to get involved. Find out more here.