Kieran Ursell set a challenge to ‘run himself sober’ in June, aiming to run 150 km and raise £500 for Nottinghamshire Hospice.

He’s so far clocked up more than 125 km and has already smashed his fundraising target.  His company, Boots, have pledged to double the money he’s raised- taking the total to date to more than £1,000.

Kieran, 34, who works as a resource planner and is currently seconded to the team which is setting up Covid-19 test sites across the UK, wanted to do something during lockdown to help towards the overall Coronavirus effort.

Kieran, from Carlton, said: “I love a drink and I’m well known for liking a good party, I did go sober for October last year but wanted to do something different this time so I built in the running element.

“I wanted to do something to help the current situation the world finds itself in. My partner mentioned Nottinghamshire Hospice as heavily reliant on donations so I went with that.” 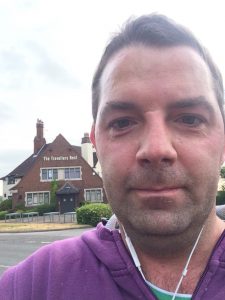 Kieran, who only ran very infrequently before taking on this challenge, says regular running and giving up alcohol for a month has made him feel much fitter and healthier. He’s kept up his resolve, running up to 8km most days despite a few injuries along the way.

He added: “I’ve suffered a few strains over the years and get tendonitis when I do too much so I’ve had to battle through the last half of the distance at a slower pace.

“I’m looking forward to a glass of bourbon when I’ve completed the challenge.”

Gemma Taylor-Mahon, Fundraising Manager at Nottinghamshire Hospice, said: “I’m so impressed with what Keiran’s done to raise money for us. Not only has he kept up with his running through the hot weather, he’s also given up drinking so what he’s done is doubly challenging. We’re so grateful to Kieran for his amazing support.”

Nottinghamshire Hospice anticipates a loss in funding of £150,000 due to cancelled events and shop closures during lockdown. It launched its Forget Us Not appeal in April to address this shortfall. Find out how to support the appeal here.