Light up a Night turns Victorian tower into beacon of remembrance

A Carlton family lit up the historic tower at Nottinghamshire hospice in memory of a much missed father and husband who died just a week after being diagnosed with cancer.

The Goode family were the first this year to support the hospice’s annual ‘Light up a Night’ campaign which invites organisations or families to sponsor a night – turning the historic tower into a beacon that shines across the city to raise vital funds to help patients.

Dave Goode, a former Nottingham City Transport bus driver, received a shock diagnosis of metastatic lung cancer just a week before he died, and Nottinghamshire Hospice stepped in to provide hospice at home support for his last few nights.

Dave’s daughter Sarah, who set up the Loughborough hand-made craft company Purple Pumpkin Patch, and Dave’s wife Hilary, lit up the tower in his memory on what would have been his birthday.

Sarah said: “Dad had been poorly for five weeks and treated with antibiotics but the diagnosis came just a week before he died. It was such a shock. We didn’t know how end of life care worked and we had no idea what to do. The hospice was our lifeline. Dad wanted to die at home and having the hospice at home service enabled that to happen.

“We have lit up the tower in Dad’s memory on his birthday for the last two years. We chose purple because our family business, which Dad helped set up, is called  Purple Pumpkin Patch. Me and mum drove down Woodborough Road on Saturday to see the purple light. We were so excited to see it we drove past twice!” 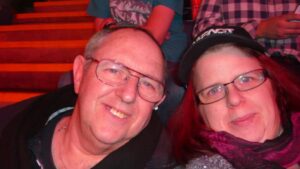 Sarah with her father Dave

Organisations are asked to donate £350 – the cost of providing a nurse to care for a patient overnight at home – to light up the tower for a night in memory of a loved one. Last year the scheme raised more than £9,000.

Nottinghamshire Hospice Corporate Fundraiser Sarah Dunning said: “We’re honoured that Dave’s family chose to light up the tower in his memory. Thank you so much to Sarah, Hilary and all at Purple Pumpkin Patch for supporting our appeal.

“The hospice building has a rich heritage which dates back to when it was one of Nottingham’s finest residencies. Our tower is its crowning glory and when it’s lit up it can be seen for miles around. It’s wonderful that people are once again lighting up the tower to remember a loved one and spread festive cheer while supporting our patients.”

Light up a Night is part of Nottinghamshire Hospice’s Care at Christmas campaign which aims to raise £50,000 to help patients over the Christmas period.

To find out more or to sponsor a night, visit : www.nottshospice.org/get-involved/care-for-christmas/light-up-a-night/