A man who suffered severe, lasting, lung damage through Covid is to run his first ever marathon in memory of his mum who received care from Nottinghamshire Hospice. He’s taking on the challenge to support the hospice’s birthday appeal.

Bryan Hucknall, 47, caught Covid in March 2020 around the time the UK went into national lockdown, along with his wife Rachel. While Rachel made a full recovery within a month, Bryan continued to struggle with his breathing.

He was eventually referred to a respiratory consultant who said he had a part collapsed lung and damage to the phrenic nerve controlling the diaphragm – which had moved up into the lung space. He’s under continuing observation. His condition – which  has reduced his lung capacity by half – is classified as a symptom of long Covid. Doctors don’t know if he will recover the full use of his lung. 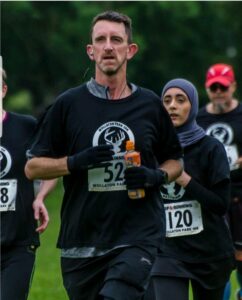 Undeterred, Bryan – who has been competing in running events since 2015, with four half marathons and  four ‘Survival of the Fittest’ obstacle races under his belt – has signed up for the virtual London Marathon, which he’s running dressed as Superman!  He’s hoping to raise £1,000 to cover the cost of two nights of overnight hospice care plus a visit a day for a week.

Bryan, who started training in May said: “COVID knocked me out of running for eight months. I’d get angry & jealous seeing others running, knowing I couldn’t run. I really missed being out there.

“This challenge is going to be hard. It’s a distance I’ve never attempted before, even when I was healthy. And I’ll have the added edge of doing it with less lung capacity. I won’t be as fast as I used to be, but I’ll keep going.” 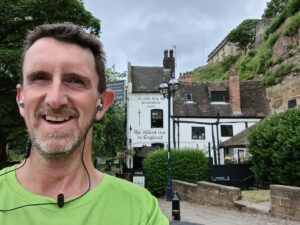 Bryan chose to support Nottinghamshire Hospice in memory of his mother Anne who died last December, aged 70. For the last few weeks of her life, the hospice nursing teams provided overnight care and visits through the day.

Anne was diagnosed with pancreatic cancer in January 2020. The hospice intervention enabled her to be at home at the end of her life.

Bryan said: “Nottinghamshire Hospice offered support at a time when there was no hope. They were experts in making my mum feel the best she could in those last weeks, days and hours.

“The overnight care gave us respite. It meant we could switch off and recharge batteries instead of being constantly on. It was reassuring to know she was being looked after by people you could trust to give her the best care possible. They’d care for her for eight or ten hours at night.” 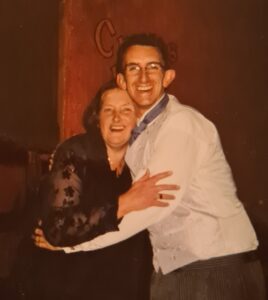 Bryan and his mum Anne

“They also visited twice a day to ensure my mum was as comfortable as possible, safely moving her to a more comfortable position, checking the morphine drip was still attached and the catheter wasn’t leaking, and professionally caring for her with the dignity and respect everyone deserves.

“It was a great package of care and reassurance. It reduced anxiety and gave her dignity, so she could die at home like she wanted to. The hospice care kept her out of hospital and enabled her to fulfil that wish.

“She passed away at her home with my dad, her sister and myself by her side. She’d lived in that house for over 40 years. Where better to die than the place you’ve lived more than half your life, with those closest to you around you.”

Because of the pandemic, the family were especially keen to avoid hospital admission as Anne would not have been allowed visitors. 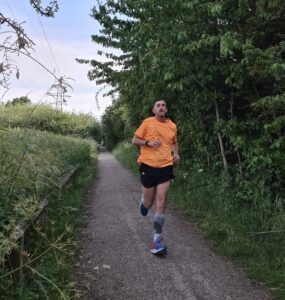 Bryan is currently running 4-5 times a week, clocking up around 35 miles each week. He runs from his Wilford home around the Embankment area and along the Trent. The week before the marathon, he’s running the Robin Hood half marathon as a warm-up.

He will join 49,999 runners around the world taking part in the Virtual London marathon and 50,000 running the actual race in London. He’s planning a route that starts at his parents’ house, goes past the hospice building on Woodborough Road, and takes in several of the hospice shops. 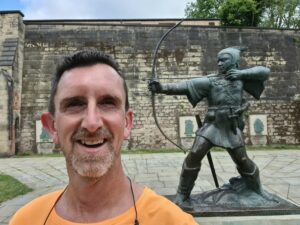 “I’ll be running the 26.2 miles in one go at the same time as the actual London marathon,” he added. “In my head, I can do this. With support from friends and family, the focus on why I’m doing it, and sensible realistic-for-me training, my body should be able to do it too.”

Bryan launched his fundraising page on his birthday to raise funds for the hospice’s birthday appeal, launched to mark 40 years of Nottinghamshire Hospice care and to help ensure the future of the hospice for another 40 years. 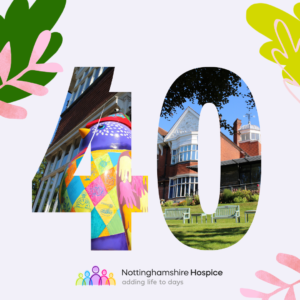 Supporters of the appeal are asked to donate £40 to cover an hour of care, put on a fundraiser, throw a party with family and friends in memory of a loved one or take on a fundraising challenge.

Rebecca Taylor, Community Fundraiser at Nottinghamshire Hospice, said: “We’re pleased we were able to help Bryan’s mum and support his family when they needed us last year. We’re so impressed by what Bryan is doing in her memory and very grateful for the support, which will enable us to help other families. We wish him well in his training.”

If you’d like to take on a fundraising challenge or donate to our birthday appeal there’s plenty of ways to get involved. Find out more here