After taking up walking following the breakup of a relationship, Sian Lovatt tackled the National Three Peaks challenge in memory of her much missed grandma,  raising more than £2,000 for Nottinghamshire Hospice. 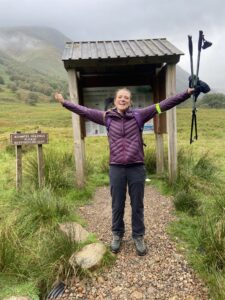 Sian said. “Nottinghamshire Hospice became a lifeline for my grandma. They provided care which allowed her to have her final wish of staying at home in those last few months – and avoid being admitted to a care home or hospital.

“They became our saviours, ensuring my bed-ridden Mamma could still live with dignity.

“More importantly they provided her with friendship. They gave her someone to talk to, someone to smile with and someone to ensure she didn’t spend her days alone. She called them her angels.” 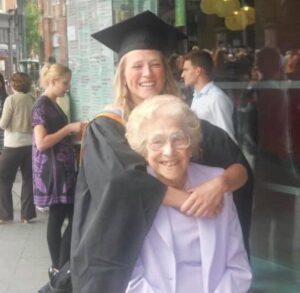 Sian said doing the challenge in memory of her grandma kept her going when the going got tough.

“This challenge pushed me physically and mentally. The first mountain, Ben Nevis, was fine but by the time we got to Scafell Pike and were setting off in darkness and I felt drained. When I got to the bottom I thought can I really do this? It was only the thought of doing it for my grandma that kept me going.” 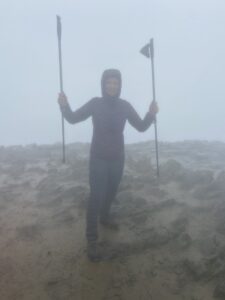 At one point on the route Sian cried with the sheer emotion plus the mental and physical effort of taking on such a gruelling endurance challenge, but she kept going, the thought of her Grandma motivating her through the tough moments.

“I wasn’t allowed to speak at Grandma’s funeral so this was my way of doing something to bring closure as well as saying ‘thank you’ to the hospice,” she said. 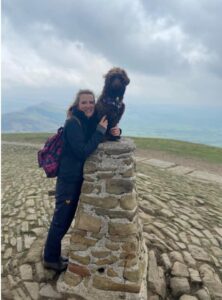 Sian took up walking when her dog came into her life, and after separating from her partner some months later she and Huckleberry took their walking to new heights as they tackled Mam Tor then Snowdon. 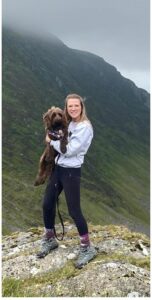 She signed up for the National Three Peaks Challenge –  one of Britain’s toughest outdoor challenges, with a walking distance of 23 miles and a total ascent of 3,065 metres – partly to prove to herself and others that she could.

“My ex-partner told me I’d never do something like this, so it was a euphoric feeling when I’d done it. I felt on cloud nine. 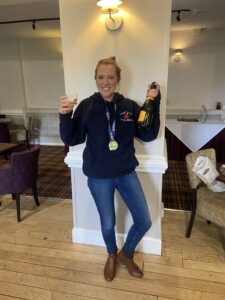 “It used to be a running joke that I’d drive up the road so it didn’t mean walking! I’ve now found a passion for exploring new places with Huckleberry.  Together we set our eyes (and paws) on new challenges. It’s amazing how therapeutic walking can be, and how beautiful the UK is to explore on foot.”

Sian’s grandma, who had COPD, became ill with pneumonia towards the end when Nottinghamshire Hospice stepped in. The hospice care enabled her to be in her Ruddington home with family around her at the end of her life. 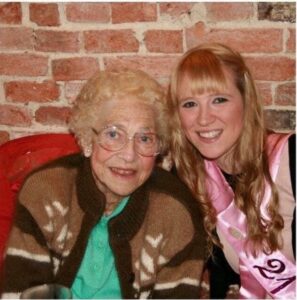 Sian said: “She was adamant she didn’t want anyone coming in, but once the hospice nurses started coming she adored them all and looked forward to them coming. They took the time to get to know her. She loved crab sandwiches and they’d often fetch her one on  their way.

“Having them there really supported us as a family. It meant we could continue to go to work, go shopping and get a break.

“In the week she was dying the hospice team were the only people who were honest with me. They told me she was near the end which I appreciated because you need to prepare yourself.”

Now Sian has completed the challenge she hopes to take on other challenges for the hospice.  She is also planning to light up the hospice tower with family members in memory of her grandma in December.

Rebecca Taylor, Community Fundraiser at Nottinghamshire Hospice said: “Taking on a challenge is a meaningful and powerful way to celebrate the life of someone you love. We’re so grateful to Sian for taking on this challenge and raising an incredible amount for Nottinghamshire Hospice, her donation will have a huge impact on the care we provide our patients this winter.”

If you’d like to take on a challenge or fundraise for Nottinghamshire Hospice, there are lots of ways to get involved. Find out more here.