Former serviceman Matt Sharpe and 17 friends are to tackle a gruelling eight-hour endurance challenge in the Peak District on Sunday to raise money for Nottinghamshire Hospice’s Forget Us Not appeal.

Matt and his friends – four of them ex-army colleagues – will take on the Cloud Walker challenge involving a 4km kayak, 30km hike and 100-foot abseil in memory of Matt’s aunt Julie.

Julie, pictured above,  received care from Nottinghamshire Hospice in her Clifton home at the end of her life after being diagnosed with Breast Cancer in 2018. She died in December 2020 aged just 62.

Matt said: “Julie was in remission but the cancer came back and spread to her lungs and brain. It was very quick. She was celebrating at my grandad’s 90th, she was dancing and seemed healthy but three weeks later she was bed-bound.

“Nottinghamshire Hospice came out to her house. They supported her and my uncle and the whole family through this time. I wasn’t allowed to see her in her final weeks but I wrote her a letter and did a voice recording for her. 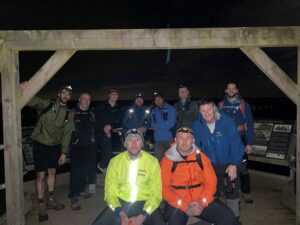 Matt – a former Infantry man from the Worcestershire and Sherwood Foresters regiment – takes on an annual challenge with his friends, choosing a different charity each year. Last year they ran to Skegness in relay and they’ve also tackled the tough mudder race.

Matt said his aunt Julie and her husband Roy – who served in the same regiment – were keen walkers which is why he chose this challenge.

Matt who has seen active service in Afghanistan and toured Kenya, Botswana and South Armaargh on training exercises, suffers from fatigue in his legs through his time in the army, but his friends encourage him.

“All the lads are training hard. Everyone’s doing it for personal goals as well as for the charity and we’re always there for one another,” he added.

The group have already raised smashed their £3,000 target and look set to raise more than £5,000 in the challenge, due to take place on  Sunday 30 May.

Rebecca Taylor, Community Fundraiser at Nottinghamshire Hospice, said: “We’re so impressed with what Matt and his friends are doing to raise funds for our Forget Us Not appeal. We’re pleased we were able to support Matt’s family when they needed us and we’re very grateful for this support which will help other families.”

Nottinghamshire Hospice launched its Forget Us Not appeal which runs throughout May to raise vital funds to help patients. Find out how to support the appeal here.