Hospice bosses go back to the front line

On International Nurses Day we are shining a light on the work of our nursing teams and today we feature two senior managers who have joined their teams on shifts across the city.

Director of Care Jo Polkey and Hospice in your Home Manager Wendy Shelvey have dusted off their nurses’ uniforms and gone back to the front line to show solidarity with their teams and understand the challenges they currently face – particularly at night.

Jo – who trained as a nurse 35 years ago – has been going out on shift with the Night Support teams, visiting up to 11 patients a night across Nottinghamshire, caring for people in their own homes at the end of their lives and responding to urgent care needs.

“The teams know me as their Director of Care, so I wanted to go in at the same level as them, to get to know them and so they could get to know me. It also helps them feel part of the hospice, as when you only work night shifts you’re not as involved in hospice life and can feel out of the loop.

“There’s an anxiety about doing something you’ve not done for a long time and feeling like you’re giving a good quality of care, which is what we expect of our staff.

“It’s a long time since I’ve given intimate personal care to someone at the end of their life. The principles of giving good quality of care are still the same, but the technology and systems that we use to work have changed.” 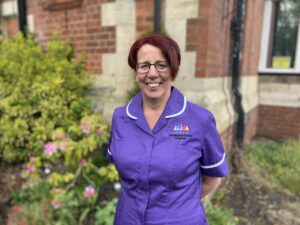 Jo listed filling out documentation on the go using laptops and the high-tech capability of modern hospital beds as two examples where things have changed, plus all the COVID measures currently in place.

Jo qualified as a nurse in 1989. She worked in hospitals for a few years then became a staff nurse in the St Ann’s area in 1993, qualifying as a District Nurse in 1997. Apart from a three-year break when she took on a Rosemary Conley franchise – Jo has spent her career in nursing.

“Being a nurse was all I ever wanted to do,” she said. “It’s hard to believe it’s now 35 years since I started nursing.

“Getting out on the front line again has helped me understand what we are asking of our staff and given me the opportunity to work as part of a team. It makes you appreciate the effort that goes into supporting people at home, not just from services like ours, but from family and friends as well.

“People live in difficult circumstances and it’s grounding to go back and see it again. You realise what a difference it makes to people who would otherwise have no-one.”

Wendy qualified as a nurse 12 years ago after being a pharmacy technician at Boots. She later trained as a District Nurse and worked in the community around Nottingham.  She has been out of front-line nursing since she joined the hospice a year ago.

Wendy, who has done six twilight shifts said: “It’s been one hell of a year for our staff so this is a way to support the team and have a greater understanding of what it’s like out there at the moment.

“Even though I’ve only been out of frontline nursing for a year, there are big differences because of COVID, right from when you get in the car. There are challenges to working at night, like trying to find where you are going – even with SatNav you can get lost, especially as there are often roadworks on at night, and reading house numbers and key safe numbers in the dark.

“Then when you get to the patient’s house people will often be asleep so you need to be quiet and not turn many bright lights on. It must be scary for a patient to be woken up in the middle of the night by someone in a mask.” 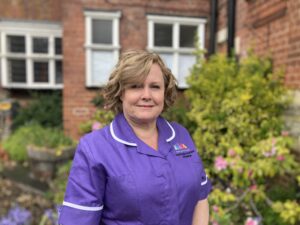 The hospice often receives thanks from families who they’ve helped in the night, and have been described on many occasions as ‘angels in the night’.

“Going out on the frontline reminds you of why you became a nurse. Families are so appreciative of what we do,” Wendy added.

Both Wendy and Jo have had positive comments from staff about what they are doing.

“They can see you’re not just a manager who sits behind a desk, they can see you’re hands on, so they have more respect for you,’ Wendy added.  ‘Good quality care is what we expect of our teams so it’s good for them to see you are leading from the front and practising what you preach.’

Night Support Teams travel across Nottinghamshire on their shifts, as well as visiting regular patients who are booked in, they pick up urgent callouts on the go. Where possible, visits are coordinated to reduce travel but teams may end up travelling from the north to the south of the county in a shift, clocking up more than 100 miles.

Jo, Wendy, and other senior staff plan to continue doing regular front line shifts and have implemented changes to empower teams to work autonomously, with confidence in their leadership.

Nottinghamshire Hospice relies on donations to fund its services. If you’d like to help, please support our Forget Us Not appeal