Tower shines blue in memory of much loved father

Tonight our tower is lit blue in memory of John French on what would have been his 89th birthday.

Nottinghamshire Hospice provided overnight care for John in his Hucknall home before he passed away in April, aged 88, enabling his family to fulfil his wish of being at home at the end of his life.

John, a former mineworker who worked his way up from the coalface to Industrial Relations Officer, lived in Spain for 32 years after he retired, but after his wife died, family members noticed a decline in his health.

“He’d lost about one and a half stone in weight and it was hard to see him like that,” said John’s daughter Terry. “My sister and I managed to persuade him to come back to the UK and we got him home between lockdowns in 2020, when he came to live with me.”

When John returned he was on medication for an enlarged prostate and Diabetes. He was also anaemic and suffered with leg pain. He later developed a lump in his neck after which he learnt he had prostate cancer which had spread.

“His condition deteriorated. We had a hospital bed installed for him downstairs and carers coming twice a day,” said Terry, who kept a baby monitor by her bed so she could hear if he needed anything.

“It was hard towards the end and I wasn’t getting any sleep. That’s when I heard about Nottinghamshire Hospice, who sent someone to be with him all night. It was such a blessing. It meant I could get some rest in the knowledge that he was being well cared for.

“We had help from the hospice for five nights in the last couple of weeks of his life. The people who came were lovely and Dad got on well with them.

“Dad used to be a compere at Hucknall Miners Welfare. He loved to talk and was full of stories and even though he had deteriorated, he still came out with his stories when the hospice staff were there,” Terry added.

A hospice nurse was present the night John died.

“The night he died the nurse came at 10.30 pm and I went to bed. She called me at 1.25 am and said you need to come down now. I was with him when he took his last breaths.

“It was important to Dad and to us that he could die at home. He said he didn’t want to go into hospital.”

John was a keen sportsman who had travelled all over the world. He was also a magistrate, and well known and respected in his local community. 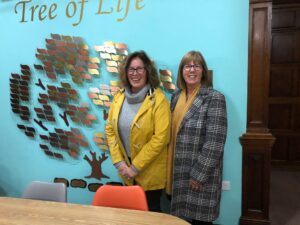 At his funeral, Terry and her sister Jacqui (pictured above) asked for donations to Nottinghamshire Hospice. They have sponsored a leaf on our Tree of Life in his memory, and tonight they are lighting the tower blue in celebration of his life.

“It’s a lovely thing to do and a nice way of remembering Dad, especially as Christmas is approaching.” Terry added.

During our Light up a Life appeal, you can light our historic tower for a night in a colour of your choice in memory of someone special. Let your loved one’s memory shine out as a beacon of hope across the city. Find out more here